images copyright 2009, 2010 by Peter Stekel, all rights reserved. Write to peter[at]finalflightthebook.com for permission.

The Beech 18 Pratt & Whitney R-985 engine [cowling removed]. Compare this engine to the photos below. 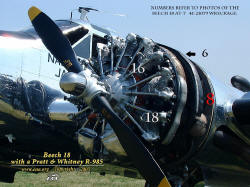 Thanks to Taigh Ramey at Vintage Aircraft in Stockton, CA, for interpreting these photos for me. Any errors, should they exist, are due to my transcription mistakes.

1. Peter Stekel [author of Final Flight] and wreckage. Top part of Mendel Glacier to the rear. The second aviator's body was found about 100 feet up canyon, or directly above my head. 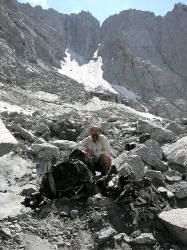 2. Writing on the inside cowling of the dishpan. I've been told that it was common for inspectors or repairmen to initial or sign their work. 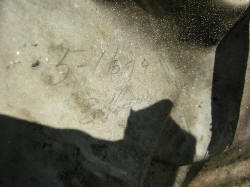 3. Ignition harness from either the front or rear of engine. Note all the conduit. Wiring ran through this conduit to reduce radio noise, which was a problem with the early Beech 18 models. All Advanced Trainers [AT] had radioes - either the SER 282 radio system or the SER 269. They also had a radio compass. All of which begs the questions, how did Lt. Gamber get lost and, once lost, why didn't he radio his last known position and ask for help? Maybe there was no one to hear his calls? 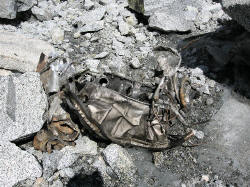 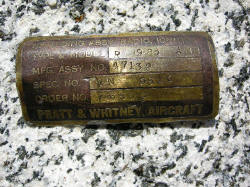 5. Magneto plate. Unusual that it is dated. Military didn’t normally allow this because they didn’t want the enemy having this data should the plane be lost in combat. There were two magnetos/engine. The magneto provides the electric charge [the spark] to the spark plugs in each cylinder. The Pratt & Whitney R985 had nine cylinders. 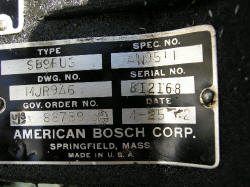 6. This rubber strip is the edge of the dishpan. It creates an air dam to keep air over the cylinders. On left are exhaust components. 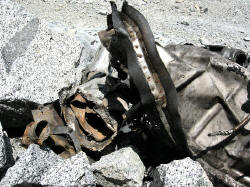 7. The back of a Pratt & Whitney R985 - the powerplant for the Beech 18. This is the accessory case. "Extremely shattered." You can see the gears for two magnetos [there were two/engine]. Attached to it is the sheet metal making up the dishpan [fire deflector]. 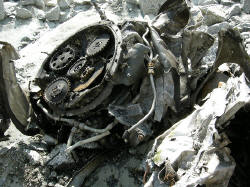 8. The dishpan. It’s bent forward, probably from impact. Intake pipe is visible in the lower right. Engine cylinders are seen behind. In the bottom right is part of the ignition harness. 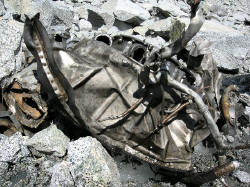 9. Magneto. Each engine had two magnetos. It looks like the paint on this unit is till in good shape. Maybe, so is the magneto? 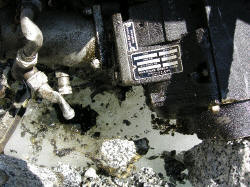 10. Looking straight into the accessory drive gears. Forward of the gears is the blower section. 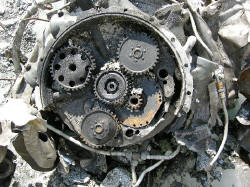 11. Identification plate on the engine generator - just like in a car. 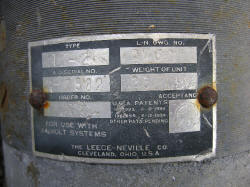 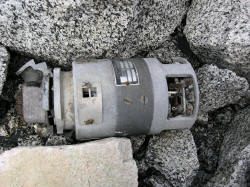 13. Shattered accessory case section of one engine [probably the right side engine]. Mid-right in the photo can be the the magneto coupling and gear. 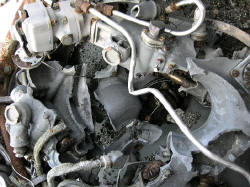 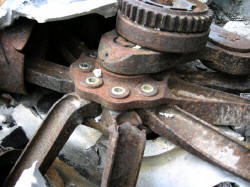 15.  Bent connecting rods, bottom of a piston and a piston cylinder. 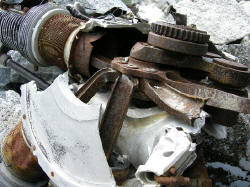 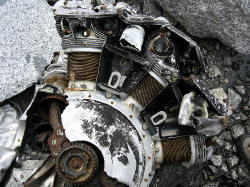 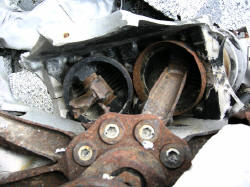 18. Engine from the Beech 18 still embedded in the ice of Mendel Glacier. 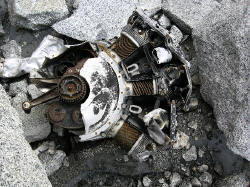 19. The extrme amount of riveting and the "X" pattern suggests this 12X12" piece of aluminium is from the rib area of the aircraft. 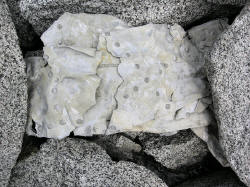 20.  Casting numbers on the engine. 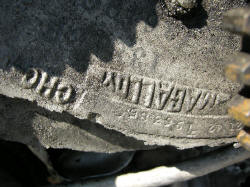 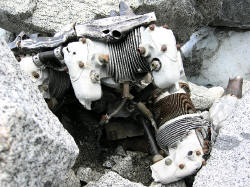 Return to Final Flight - the Book.